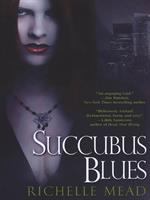 When it comes to jobs in hell, being a succubus seems pretty glamorous. A girl can be anything she wants, the wardrobe is killer, and mortal men will do anything just for a touch. Granted, they often pay with their souls, but why get technical?

But Seattle succubus Georgina Kincaid's life is far less exotic. At least there's her day job at a local bookstore--free books; all the white chocolate mochas she can drink; and easy access to bestselling, sexy writer, Seth Mortensen, aka He Whom She Would Give Anything to Touch but Can't.

But dreaming about Seth will have to wait. Something wicked is at work in Seattle's demon underground. And for once, all of her hot charms and drop-dead one-liners won't help because Georgina's about to discover there are some creatures out there that both heaven and hell want to deny . . .

"Mead cooks up an appetizing debut that blends romantic suspense with a fresh twist on the paranormal."-- Booklist

"The mix of supernatural mystery, romance and reluctant succubus is great fun."-- Locus

OMG. This is a great series! You must read it.

29/11 - Really loving this. There have been some laugh-out-loud moments (especially when Georgina was telling the 'random coffee customer/Seth Mortensen fan all about what she'd like to do with Seth Mortensen if she ever met him).

It was clear from the beginning that either Seth or Roman was going to end up being the bad guy (it's almost always someone the MC already knows). It was then clear after the first time Seth accidentally touched Georgina that Roman was the bad guy and Seth the love interest (not necessarily for this book though, for some time in the future). What's still to be revealed is why Roman has decided to go rogue angel on Georgina's fellow evil beings (evil being a fluid description for what Georgina, Peter, and Cody are), while at the same time attempting to get naked with Georgina. Maybe he's attempting some kind of undercover, spying on the enemy kind of thing.

I like that Georgina is a 'good' succubus, only using her life force-sucking kiss/sexual abilities when absolutely necessary (the book would be much more difficult to read if she enjoyed her 'job' as Hugh does). She reminds me of Bo in Lost Girl, which I love. I like the way Seth Mortensen is described, his personality and strange behaviour. It makes me think Mead is using some of her own peculiar personality traits in Seth. Talking about what an author thinks of getting the same question over and over again, explaining an author's near-absenteeism at important family events, talking about the characters as if they're real people who won't behave themselves, showing that while an author may be able to write pages of prose that readers go mad for, they aren't necessarily so eloquent in person. All of that feels like true insight (as in, not exaggerated, not made up) into the life of an author, maybe even Mead herself's life. To be continued...

1/12 - First 'review' of the last month of the year! Succubus Blues was a great book. A fun, easy read with a kick-ass (verbally, not physically, despite the way she's depicted on the front cover), wise-cracking heroine. Sort of an adult version of Rose without the physical abilities. I like the fact that Mead has been able to write three supernatural series with three different female narrator-protagonists and give each character their own individual voice, that is clearly theirs. You certainly couldn't confuse Rose with Sydney or Sydney with Georgina. I suppose Rose and Georgina are a little similar but Rose doesn't swear and Georgina has absolutely no fighting skills, so that separates them despite the similarity in their wise-ass talking style.

Of course I was right with my supposition that Roman would be the bad guy (reading other reviews, I see that I wasn't the only one who had no trouble guessing who the nephilim would be), but I had no inkling that there would be a secondary nephilim and I was far from being sure on who it would be. I was thinking that it could be Seth's brother's wife or one of the sales assistants that Georgina poached from Helen, I thought crazy-angry faux aura-reader Helen was a too easy guess after how easy Roman's role was to work out. Oh well, I guess they can't all be impossible-to-solve mysteries that keep readers on the edge-of-their-seats till the last page. I'm looking forward to getting my hands on the next in the series ASAP.

Reminded me a bit of a Sookie Stackhouse novel mixed with a Stephanie Plum novel, except this was is steamier. I enjoyed it, and look forward to the rest of the series.

I wonder if a lot of fantasy authors are under 15. Their protagonists read as wimpy, boring, pedestrian 13 year old girls.Trying to wonder if it is worth finishing this book. She is BORING.

Was hoping for an unconventional and strong, no-apopologies kind of heroine. This one is subservient and everyone's bitch. Stopped after about 25 pages because I was too bored with her. It's also illogical, so overall.. pretty shoddily written.

Oooooh, who is Carter really? And can she keep up the romance in the next series. Needless to say, this book was a great read and has me hooked.

A bit overly “woe is me” on Georgina’s love life, but there’s enough snarky attitude to pull her through the miserable bits. I’ll give the second book a try.

Seattle writer Richelle Mead writes this strictly fun, not too serious take on the life of the Succubus and her angel/demon cohorts

Awesome book: Great story, perfect organisation and sweet, lovable charecters.
Though Icouldn't help being a teensy bit judgemental of Georgina, I went ahead to like her. And Seth!!!

There are no ages for this title yet.

There are no notices for this title yet.

There are no quotes for this title yet.

Find it at HCL