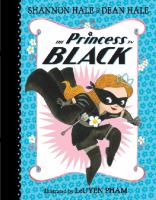 The Princess in Black

Terrible. This story attempts to tiptoe away from sexist stereotypes but just succeeds in reenforcing them. Also, a goat eating monster? Weird. I don’t understand the volume of positive reviews.

Princess Magnolia is prim and perfect, as a princess should be, or is she?? Princess Magnolia has a big secret, she is not your ordinary princess. When you live close to Monster Land and wear a Monster alarm on your finger, your tea party plans can change at a moment’s notice. This book is a great introduction to chapter books for emergent readers. It’s full of fun and great illustrations. A great book to share or read on your own. This is the 1st book in a series of fun adventures!

what is it about I bet I will love it.
comment from my daughter.

Such a cute and charming story about a princess who is also a superhero.

Great book for beginner chapter book readers. My 7 year old loved reading this, and I thoroughly enjoyed the story too!

I've wanted to check this series out for awhile now and the Librarian Challenge in our library system gave me the perfect excuse to check out these delightful chapter books. Princess Magnolia has a secret and Duchess Wigtower is determined to discover it by hook or by crook. Meanwhile the goats must be kept save from the monsters that keep sneaking up into their field through the hole in the ground between the monsters' lair and the goats' field. Will the goat boy get his chance to work alongside the Princess in Black -- and who is she really? Bring it on -- more Princess in Black, please.

Let's the princesses out there know you don't have to be anything less than strong to be a great princess.

The Princess in Black is actually a superhero in disguise who fights off monsters trying to eat the goats. I liked her pony who disguises himself as a unicorn. Everybody's name in the book is really funny. Review by Abby Fife.

A fun and exciting chapter book that indulges your princess side plus a great dose of monsters and saving the goats! You'll see what I mean when you read it. Plus, excellent illustrations.

Just because the little kid in your life is obsessed with princesses doesn't mean she.he has to soak up the powerless-princess mentality! The princess in black kicks major booty while playing with classic princess stereotypes.

My 4 year old is that perfect balance between tomboy tough and princess pretty. She wants to be like her older brother but still run around in pretty dresses (with a sword, of course). She loves princess Magnolia and all her friends. The only thing she and I would like better is if the author would put pictures & names of all the princesses at the front of the book for reference. While I'm reading to her she's constantly asking who is who. It's not very easy to figure it out. Other than that we both love the books and hope the author decides to write more!

Who says princesses don't wear black? A monster is on the loose, but luckily Princess Magnolia has a secret —she’s also the Princess in Black, and stopping monsters is the perfect job for her! Can the princess sneak away, transform into her alter ego, and defeat the monster before the nosy duchess discovers her secret?

When Candlewick Press offered us a review copy of The Princess in Black by Shannon Hale and Dean Hale, I said yes!

Because who wouldn't want to read this? Incognito princess fighting monsters? Perfect! Art by LeUyen Pham? Even better!

I tried only reading part of it to Boy Detective, but that was no good. He wouldn't let me stop until the end. And as the back cover closed, he asked, anguished "IS BOOK TWO OUT YET?!"

Son, I'm sorry, but the first book just came out in October. Cue loud dramatic sighs and complaints about the unfairness of the world. (It's like he's a teenager already.)

Princess Magnolia's double life is right up there with Diana Prince/Wonder Woman or Peter Parker/Spider-Man. She never knows when her glitter-stone ring monster alarm is going to go off. Today, unfortunately, it's during tea with sneaky Duchess Wigtower! Can she protect the kingdom and her own secret at the same time?

The text is a little clunky in parts for an adult to read out loud, because it's clearly written for kids reading to themselves. But if you can resist a unicorn named Frimplepants, then I don't know how to help you.

What I loved about this book, aside from the humor, is that Princess Magnolia is just as real as her alter ego. She doesn't have to choose which girl she wants to be. She can excel at dressing pretty and kicking monster tail. I see my nieces in Princess Magnolia. Sports and nail polish? Sewing and computers? Yes please, all of that and more. I also see my son, who has long hair and loves rhinestones, plus builds Lego death rays and does jiu jitsu. In short, Princess Magnolia is complex, just like every kid!

This is such a cute book. My 3rd grader loved it. She said she loved how she is a princess and then turned in to a super hero.

In a similar vein to Kate DiCamillo's Mercy Watson series, this work is simple, enjoyable with a playful presentation. Recommended for children reading on their own.

Princesses do not run. They also don’t hide their frilly, pink dresses in a broom closet, slide down secret chutes, or jump over castle walls. And princesses definitely do not wear black. But Princess Magnolia is no ordinary princess… she’s a monster-fighting superhero in disguise, The Princess in Black!

Perfectly pink and proper Princess Magnolia has a dark secret. A black secret, to be more precise. When trouble arises, she secretly becomes masked hero The Princess in Black, protecting goats and keeping monsters in line. Short, easy sentences (and chapters), a fun sense of humor, and appealing illustrations make this a winning package for beginning readers.

An early chapter book with big text, lots of illustrations, and a rollicking story about a princess who secretly fights monsters. The tone is playful and fun. This should be a hit with high-energy princess lovers who also enjoy books like The Paperbag Princess and Fancy Nancy.